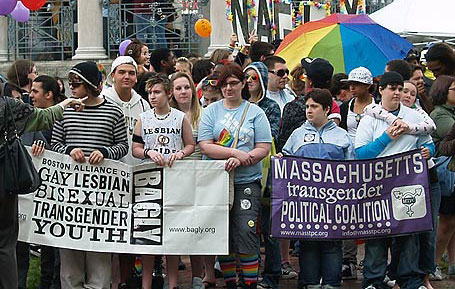 I find this kind of sad.

We have reported how the radical "LGBT youth programs" in the public schools are encouraging troubled kids to begin dressing as the opposite sex and then take on a "transgender" identity. In Massachusetts, after the Transgender Rights Law was passed the Department of Education immediately began taking steps to force public schools to officially embrace and support such behavior by kids, letting them use opposite-sex locker rooms and restrooms and changing their names on official records. At the same time, they are imposing radical diversity training on others, and intend to punish students and faculty who voice any disapproval.

But what happens to these kids after they leave school? Unfortunately, this bizarre, unnatural "identity" causes many of these already troubled youth to become even more dysfunctional. Some quit school early. Many of them get involved with drugs and alcohol. A shocking number of them become almost completely disengaged with normal life. They leave home and wander the streets, falling in with other troubled people. (And some of the most trouble people are at the state-sanctioned youth "support groups" such as BAGLY).

Click on the link and read more. Just heartbreaking.