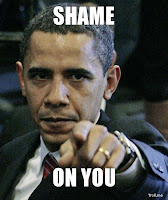 I really liked this post from The Clown at Midnight about the left's shaming tactics.

I think it's an important topic that needs to be explored.

Because the more we expose these shaming tactics, the less impact they will have.

Liberals know that even though we supposedly reject the liberal consensus, we want to be liked by others. We don't like being thought of as racist, sexist, homophobic, and all the rest of it. So we try to demonstrate that we are not, and the Liberals declare that we have a hidden agenda.

Stop trying to prove that you are not racist, sexist and homophobic.

If you answer those charges, you make them powerful.

Some conservatives make the mistake of thinking that all they have to do is try really hard to not say anything that is socially unacceptable. For example, John Tory hates being shamed so much that he does more than any other person I know to prevent himself from saying or doing things that are offensive to others. This doesn't help him at all, though. During the 2007 election, the OLP sold Ontario voters the patently ridiculous notion that John Tory was a secret social conservative, and the Ontario voters bought it.

By contrast, Rob Ford is immune to being shamed. He does not appear to feel the emotion at all. I do not know if Ford is just not capable of being shamed, or if he's figured out a way to not feel it. The how is not as important. So long as Ford isn't shamed by anything, whatever his opponents try to tar him with just bounces off. The Toronto Star in full outrage combined with rabid media attention and former Ford loyalists running for cover does not matter worth a damn as far as Ford is concerned because Ford is not concerned. And because the left has no other tricks in their bag besides trying to shame Ford out of office, he's not going anywhere.


The only way to deflate leftist shaming tactics is to respond with a collective: I don't care.

There is one part I strongly disagree with:

When people say we are "mean-spirited", it hurts our feelings and we have to make the sad feels stop.


It doesn't hurt my feelings.

People have a lot of control over their feelings. I think that's a right-wing stance.

And even if you feel bad, you can talk yourself out of it.

I really hope the blogosphere takes up the subject. It's really important.