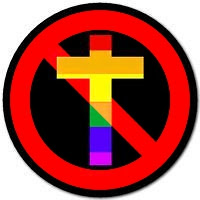 Yes, people professing to be Christians can say they support homosexual relations.

But even the most cursory examination of Christianity shows that this is bogus.


In Christianity, the legitimacy of a truth claim is measured against Divine Revelation.

Now it is true that "Bible alone" theory makes it difficult to authoritatively establish any doctrine because the interpreter's subjective reading of the text is made the arbiter of doctrinal truth.

In spite of this difficulty, it can be plainly shown that Divine Revelation consistently condemns sodomy and only sanctions relations between a man and a woman.

There was no argument on this point for twenty centuries.

Only when homosexuals began to demand approval for their sexual behaviour that people suddenly began to discover that Christianity doesn`t "really" condemn homosexuality at all.

Of course this is revisionist non-sense.

But if Bible alone theory is not convincing, the fact that Sacred Traditon, that is, then the universal witness of the Church should be proof enough. Every Church, whether apostolic in origin or not, condemned sodomy until the twentieth century.

If one is serious about one's Christian faith, videos of people saying they're okay with same-sex relations doesn't matter much.

Unfortunately, people, especially young people, are led astray by this kind of non-sense because it's typical at that age to think "if so-and-so thinks it's okay, it must be."

The way to undermine this kind of peer pressure campaign is to challenge their basis of the Christian Faith. On what basis do they claim that homosexuality is okay? Love? Well God doesn't think it's love. Compassion? Compassion doesn't mean betraying the truth of God's Revelation.

If nothing else, answering back will have the advantage of showing the intellectual weakness of mushy-headed, emotion-based liberal Christianity.