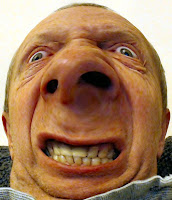 Are you a chronically angry Catholic?

He's a staple of online debate boards and comboxes.

* Insist on challenging every unorthodox statement.

* reply at every erroneous statement.

* Feel you must convince people you are right, because souls are at stake.

* React with an angry tone at every news item that speaks of Catholic dissent.

* Never seem to be happy as a Catholic.


Anger can be righteous. Anger can also be one of the seven capital sins. Here are some of my thoughts on the matter:


There are many things going on in the Church that are worthy of our anger. Nobody is saying you have to stop being upset.

That being said, you don't have to express your anger at every turn.


The life of a Catholic should not consist of being ticked off at everything. When anger and debate are a way of life for you, it's time to reassess.

Even God gives anger a rest.


3. Giving up chronic anger does not mean you have to give up commenting or debating.


People who are always angry and irritated are a turn off. You will are less likely to be taken seriously if you're always complaining about how wrong people are. You words more likely to be considered if they are written in an even-level tone, without any debate-winning agenda.

And when you react to everything, it makes you tiresome to others. Consider the phrase: less is more.


This phrase has many applicable meanings.

It doesn't mean that you stop speaking the truth.

It also means that you are under no obligation to have all the answers.

You are under no obligation to convince people all the time. Yes, it would certainly help the Catholic faith if you could, but you don't have to. If someone will not be convinced, then so be it. It's not your job to make it happen.


6. In most cases, your opinion doesn't really matter.


There are some times when your opinion is really crucial, like when you vote or when you're talking with your spouse.

But most of the time, it doesn't.

Your opinion on liturgy, or the pope, or prayer or anything else is of small consequence.

Again, you want to bear witness to the truth, but it's often just a mustard seed. Most seeds die. Most of what you say will fall on deaf ears online.

So it's not that important that you get it out every single time. By all means, speak out. Don't make a point of making sure your opinion is noted, acknowledged and considered in all its seriousness.

It's not that important. Really.


7. Give up having the last word


In the online world, having the last word can often appear to be the way to win an argument.

If it appears that your opponent has nothing left to say, it looks like you won, ie. that you're right and they're wrong.

So you don't have to have the last word.

If your opponent wants to think he's right, and you gave your explanation, you are under no obligation to make him think he's wrong.

One more argument, one more devastating comeback will not convince him nor anyone else.