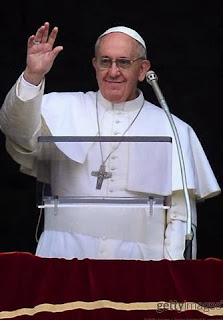 The MSM is having a field day on this latest Pope Francis Interview. Check out these headlines that I pulled off of Google News:

Pope Francis: Church's 'obsession' with gays, abortion and contraception means it risks 'falling like a house of cards'

Pope Francis: Catholic Church could fall like a 'house of cards'

You'd think the Church had just renounced her doctrinal stance on those matters.

You'd think the Pope was leading people away from preaching against them.

That's not it at all.

What did he actually have to say about abortion?


Why is this surprising or controversial?

While abortion is the biggest evil the world is facing, and arguably the biggest social evil in history, the Church's primary is not to fight abortion.

The Church's primary function is to save souls.

Orthodox Catholics can be so wrapped up in fighting abortion that we've lost some of that missionary spirit.

We're so busy secularizing our message that we forgot the need to bring people to Christ.

But bringing people to Christ will advance the culture of life.

It can be argued that the loss of souls is even more important than the loss of human life.

Now it is true that this interview will be perceived as a cue to tell pro-lifers and other social conservatives to shut up.

But they're lying. Just like they lied about Pope Benedict approving condoms or when they implied that Pope Francis said  that atheists are going to heaven.

So why is this any different?

Now there is another section that I can see being used as a club against Traditionalists. I'm posting the whole passage so you can read it in context:

“The risk in seeking and finding God in all things, then, is the willingness to explain too much, to say with human certainty and arrogance: ‘God is here.’ We will find only a god that fits our measure. The correct attitude is that of St. Augustine: seek God to find him, and find God to keep searching for God forever. Often we seek as if we were blind, as one often reads in the Bible. And this is the experience of the great fathers of the faith, who are our models. We have to re-read the Letter to the Hebrews, Chapter 11. Abraham leaves his home without knowing where he was going, by faith. All of our ancestors in the faith died seeing the good that was promised, but from a distance.... Our life is not given to us like an opera libretto, in which all is written down; but it means going, walking, doing, searching, seeing.... We must enter into the adventure of the quest for meeting God; we must let God search and encounter us.

“Because God is first; God is always first and makes the first move. God is a bit like the almond flower of your Sicily, Antonio, which always blooms first. We read it in the Prophets. God is encountered walking, along the path. At this juncture, someone might say that this is relativism. Is it relativism? Yes, if it is misunderstood as a kind of indistinct pantheism. It is not relativism if it is understood in the biblical sense, that God is always a surprise, so you never know where and how you will find him. You are not setting the time and place of the encounter with him. You must, therefore, discern the encounter. Discernment is essential.

If the Christian is a restorationist, a legalist, if he wants everything clear and safe, then he will find nothing.Tradition and memory of the past must help us to have the courage to open up new areas to God. Those who today always look for disciplinarian solutions, those who long for an exaggerated doctrinal ‘security,’ those who stubbornly try to recover a past that no longer exists­—they have a static and inward-directed view of things. In this way, faith becomes an ideology among other ideologies. I have a dogmatic certainty: God is in every person’s life. God is in everyone’s life. Even if the life of a person has been a disaster, even if it is destroyed by vices, drugs or anything else—God is in this person’s life. You can, you must try to seek God in every human life. Although the life of a person is a land full of thorns and weeds, there is always a space in which the good seed can grow. You have to trust God.”

The Pope is talking against trying to recreate the past, to make faith all neat and tidy.

Is he saying that we should abandon dogma? Not at all.

What he's saying is that dogma is not the be-all and end-all of encounter with God.

But a personal encounter with God is more open-ended than the tidy doctrinal definitions that the Church has put out.

So what does this mean?

Doctrine does not  replace the heart-to-heart people have with God.

This heart-to-heart is not boxed in by doctrine.

People of all walks of life, sinners and saints, have encounters with God.

Being a Catholic isn't reduced to knowing and implementing good doctrine. That's what he's talking about when speaks of  'doctrinal security'. Faith is about transforming lives. Doctrine doesn't serve any purpose if hearts aren't changed. And that's where you find the open-endedness. People don't operate on propositions. They operate on inspirations, enlightenment, moment-to-moment providential circumstances.

It's not a betrayal of Catholic doctrine to work with people who are in objectively sinful situations.

We can't require people to be perfect before they encounter Christ.

And so the disciplinary angle may not be the best way to deal with them.

These are not the words of some whackjob liberal trying to make Christ into some hippie.

These are the words of an orthodox pope trying to bring people to Christ, and save their souls.

I will say one thing: the pope resembles that passage.

Should we be so offended that he said it in a way that make be taken to be a swipe at conservatives?

Rather than worry about the conservative/liberal dichotomy, we should be asking:

I think it's highly orthodox and can be helpful.

Never suppose that we're so perfect that we are never in need of correction.

It's true that we have a lot of doctrinal dissent in the Church.

But maybe a bigger issue is that we have a lot of doctrinal indifference among Catholics.

And they're going to hell because they haven't heard the message of salvation and had that encounter with Christ.

This is not some dissident, faith-destroying message.

This is hardcore Church-building.

And yeah, it may SEEM like it's undermining the fight for fetal rights, I don't think it undermines the pro-life message at all. If anything, creating more Christians will help the pro-life cause in the long term.

If there's any doubt to Pope Francis' commitment to fetal rights, I just want to recall a statement he made while he was a cardinal:

"Defend the unborn against abortion even if they persecute you, calumniate you, set traps for you, take you to court or kill you.  "

I don't think we have anything to worry about.

I would also like to add one point: This is not a verbatim transcript of the interview. It's one magazine's highlights. We don't actually have his words. It's not impossible his words were 'interpreted.'