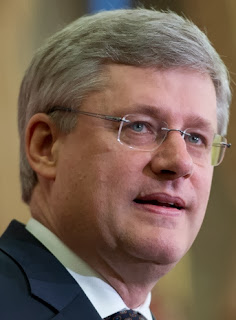 But, mostly, I could not believe that this was happening – of all people – to Nigel Wright. If there is anyone of my generation who has devoted themselves more selflessly to the Conservative Party, I do not know who it is.

It goes without saying: I don’t know the full facts in the Senate scandal, which has become a cancer on the government. But I do know that blaming Nigel Wright for all of it is not merely dishonest – it is disgusting.

That man who you cheered and applauded in Calgary, this weekend, Tory faithful? He’s not the formerly young Conservative aide from Calgary. He’s a career Ottawa politician, and all he cares about is his survival.


As a social conservative, I am already keenly aware of how ready Stephen Harper is to throw people under the bus for political purposes.


I haven't watched the scandal closely. The amounts of money at play in the Senate is peanuts. It's not that it doesn't deserve redress, but there are bigger injustices in the world.

But what has struck me about this whole affair is the complete lack of loyalty on Stephen Harper's part.

I realize that loyalty has its limits. If Patrick Brazeau, for instance, were convicted of domestic abuse, then I would understand that loyalty would take a backseat and he would have to be turfed.

But nobody has been convicted of anything yet.

As Ezra Levant has said, I don't see the scandal.

The rules appear to be vague.

I suspect that Senators had a commonly accepted modus operandi that didn't adhere to any written rules, and Mike Duffy and Pamela Wallin got caught in the dragnet. There are probably other guilty members we just don't know about.

Instead of trying to defend the people who served his party, his agenda, Stephen Harper is throwing these people overboard in the name of clinging to power.

This case makes me think of Helena Guergis.

There was no evidence of criminal wrong-doing on her part.

But she was turfed. She was a liability. She undermined the party's chances of being re-elected.

Now I get that the purpose of a political party is to win elections.

But should that mean that morality be thrown out the window?

If Harper cannot be trusted with his own people, how can Harper be trusted at all?

Harper is heads above shoulders of Justin Trudeau and Tom Mulcair.

But is that any reason not to hold him to account?

If we don't punish politicians for bad behaviour, then we're enabling it.

ADDENDUM: That all being said, I recognize that Warren Kinsella did not write this post straight from the heart. Everything he writes is to advance the cause of the Liberal Party, and he must've known that right-wingers such as myself would be thinking the same thing.

Nonetheless, it still has to be said, regardless of the intentions.