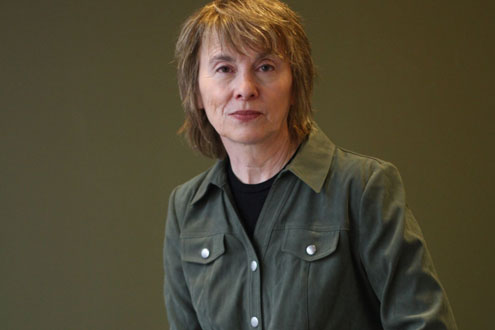 Camille Paglia has had two articles about her in Salon, recently.

In one, she underscores that men and women are different. It's such a basic premise but it's still widely ignored, even among Catholics. I was just debating the point some days ago.


In other article, she says of New Atheists:

I regard them as adolescents. I say in the introduction to my last book, “Glittering Images”, that “Sneering at religion is juvenile, symptomatic of a stunted imagination.” It exposes a state of perpetual adolescence that has something to do with their parents– they’re still sneering at dad in some way.


I don’t believe there is a God, but I respect every religion deeply. All the great world religions contain a complex system of beliefs regarding the nature of the universe and human life that is far more profound than anything that liberalism has produced. We have a whole generation of young people who are clinging to politics and to politicized visions of sexuality for their belief system. They see nothing but politics, but politics is tiny. Politics applies only to society. There is a huge metaphysical realm out there that involves the eternal principles of life and death. The great tragic texts, including the plays of Aeschylus and Sophocles, no longer have the central status they once had in education, because we have steadily moved away from the heritage of western civilization.


When atheists reduce the Christian faith to "a bunch of fairy tales", they're exposing their cultural ignorance, and it's time we called them out on it.

Speaking of faith, here is all  of Pope Benedict XVI'S 39 tweets. Not anything to write home about, but I think we should print them on a piece of paper and preserve them in the Vatican museum for historical purposes. I don't trust computers enough to preserve them.


The lionization of Andy Warhol must stop. Yes he went to church every week. So what? People are trying to find a cool celibate gay icon for the youth to relate to. Really, it's time we stopped this "gay cool" meme. Cool is not a Christian value. Hipsters are, well, hip, but that doesn't make them holy which is the whole purpose of the Catholic faith. Andy Warhol might have been a church attendee, but his life does not suggest holiness. Yes he was celibate. But his artwork was not necessarily chaste, and his lifestyle doesn't suggest it either. Making Andy Warhol into a gay icon might give the impression that his homoerotic works were somehow okay. Instead of trying to get kids to be cool or look up to cool, maybe we should be trying to instill in them the notion that the World is not Your Friend. Jesus is.

Which brings me to my next topic: Why Liberal Religion Fails:

Here’s a truth most liberal religious elites especially don’t understand. Most religious liberals attend or at least affiliate with conservative churches. Most American Catholics may tell pollsters they affirm abortion rights and same sex marriage, yet still they cleave to a church that will always reject both. The average Evangelical megachurch probably has more liberals in its typical auditorium than do a dozen Mainline churches collectively in the same neighborhood.

In Washington, D.C. there are dozens of Evangelical church plants collectively with thousands of young people, many of them socially liberal. Yet the liberal Mainline churches in the city that aggressively espouse liberalism have no comparable following. Instead they often rent their mostly unused sanctuaries to Evangelical groups.

Even religious liberals, if only subconsciously, crave permanence, authority, transcendence and a challenge to their common assumptions. For these reasons among others, organized liberal religion will never be widely popular.