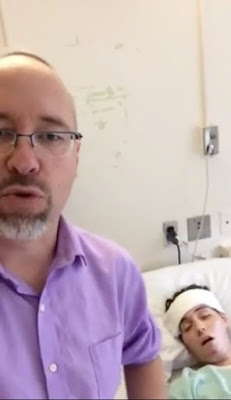 Luc Charbonneau has a message for politicians: he wants them to stop pussyfooting around and allow the Quebec Health System to help his son die.

His son, Olivier Charbonneau, also known as DJ Cabanon , attempted suicide by jumping from a building on October 10th. He fell 75 feet. According to the father, Olivier only has 10% brain function. He can breathe on his own, and his heart beats, and that’s it. He is said to be in a vegetative state, resting at Montreal General Hospital.

Luc has created a video of himself, with his son in the background to communicate his distress over this situation. It has gone viral, being viewed over 342 000 times.

The transcript is as follows:


Hi. My name is Luc Charbonneau, father of Olivier Cabanon Charbonneau. Olivier attempted suicide on October 10th, 2015. This is about medical aid in dying. This [video] is to make politicians, senators, and judges understand that this situation is complicated. My son was extubated last Saturday [November 29th]. We have waited a week for him to die. I give him what is prescribed by the doctor [name of medication unclear] every hour and three injections of Activan to help him not suffer. His brain is completely disconnected. Only 10% of his brain function is left. It’s breathing and it’s his heart, and that’s it, that’s all. Because of idiotic laws, that you quarrel over for a bunch of non-sense and junk [because] you only thinking of your [swear] image. [Mocking tone] All you care about is what will people think? What lawsuit will we be hit with? According to the Criminal Code, that doesn’t work. Hey! Meanwhile, there are people like me who are waiting for my to son die. There are vigils held by 19-year-old youths, the same age as him—because at night, I have to go to sleep now and then. Please. This is unimaginable. He jumped from a building 75 feet tall. He didn’t think he was still in this world. [Emotional] But we have to wait that he dies on his own. We shorten the suffering of a dog because he is handicapped or half dead. But we are unable to shorten the sufferings of a human being. What’s that [swear] thinking? Please share my video. I post it so that politicians hear us. And I will fight loudly. We haven’t heard the last of me. Because this is senseless. If you want to go see Olivier’s page – he made music—[…]

(Note the message is embedded with the video).

The Federal Government has also been granted an extension by the Supreme Court to re-write the Criminal Code in order to allow assisted suicide.

I find this situation extremely troubling. A youngster tried to kill himself. And now the Quebec Healthcare system is attempting to help him finish the job.

A number of questions should be raised:

Is the Father’s assessment of the son’s medical state accurate? There is no independent confirmation from the media. That should have been a basic question.  There should be independent verification of what kind of cognitive function he is capable of. “Vegetative state” is a vague term. It’s also a de-humanizing term. Journalists should be a little more suspicious.

Another question: why did the youth want to kill himself? Surely he must have friends who have an inkling of what his situation was.