The Antidote to Radical Traditionalism? Trust and Charity 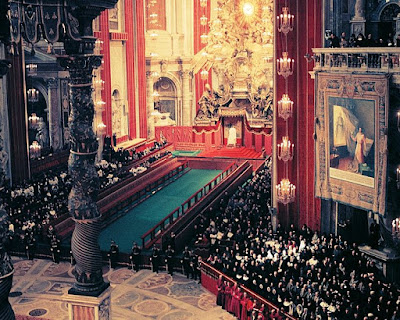 A quote from a long and pensive blogpost by Dave Armstrong, dealing with RadTrads, which he calls RadCathR's:

It’s a lack of faith that occurs in RadCathR circles: like theological liberals and Protestants, they can’t bring themselves to believe that God could protect His Church and His popes and ecumenical councils to such an extent. Lacking this faith, they then pick and choose what to dissent from. It’s a cancer.

Our Church was made to be dummy-proof.  When Jesus set up the Church, the system by which the Truth would be expounded and defended, he knew what he was doing. He said to Peter: "What you bind on earth will be bound in heaven,". Peter's authority wasn't just about infallible statements. Christ didn't specify that theological statements had to be accompanied by Anathema sit.  He effectively said that what Peter decided was equally binding in heaven. Now that conferral of authority was accompanied by the promise that the Gates of Hell would not prevail, which the Church has always understood to mean that that error would not prevail. But the promise of infallibility goes hand in hand with authority. What the pope imposes on the Church is as if God imposed it from heaven.


When the Church authoritatively teaches that individuals should have the political right to worship without government harassment, (i.e. benefit from religious liberty-- to pick a RadTrad bugaboo), we have to receive the teaching, because it's binding in heaven. No, it's not an infallible statement, in the sense that there is no precise formula to assent to. But there is a core idea that requires submission. Perhaps not all the niceties have been worked out in this idea. It is not perfectly articulated. But the broad idea is not subject to question. It is bound in heaven.
.
There never existed in our Church's history the idea that the Pope can teach a doctrine to the universal church and the faithful are somehow excused from obeying. Now some RadTrads argue that that when a pope teaches a heresy, as they contend recent popes have done, they are not real popes. A heretic cannot metaphysically be part of the perfect Body of Christ, so his willful heresy cuts him off from the body and effectively deposes him.

The problem with that assertion is: who decides when the Pope is in heresy? The Pope has the power to decide if any individual Catholic is in heresy. But by what authority can anyone depose a Pope? The question answers itself. There is no such power. (Recall the medieval phrase "The Pope is judged by no one.")

By theological necessity then, I think it's safe to say that no Pope will ever commit a critical error, even on matters that are not defined. He will never be cut off from the Body of Christ and thus never lose his authority. The Catholic system was designed so that the faithful would never be theologically without a sure guide. If God leaves such determinations to the subjective judgement of the faithful, then they will always exist with the underlying uncertainty that their Supreme Leader doesn't genuinely possess the religious authority he is supposed to be conferred with. It can turn into a game of Magisterial proof-texting to justify non-compliance with Catholic doctrine, the same game Protestants play with the Bible to justify their rejection of Catholicism. The words of Pope Francis can be pitted against that of Pope Gregory XVI and those of Pope Benedict can be contrasted with thos of Pope Pius IX. And that way a Catholic wouldn't have to listen to any pope!

Fidelity to the Church should not require committing papal encyclicals to memory in order to be able to detect and/or reconcile apparent contradictions between teachings of the past and those of today's pontiffs. Catholicism was never meant to be this hard.

It comes down to a matter of trust.

Did you ever notice that faithful Catholics don't sift through the Bible with a fine-tooth comb, trying to reconcile supposed biblical contradictions? Why? Because they trust. They don't need to do that to make sure that the Bible is doctrinally consistent. The authority of God, through the Church, guarantees the authenticity of Scripture. They trust that authority. It would be easy to pit Bible passage against Bible passage. And some people do play that biblical comparison game and no longer trust the Bible.

The same thing effectively happens with RadTrads and the Magisterium. They pit 19th century encyclicals against Vatican II.

They do that to the point of no longer trusting the Church.

Faithful Catholics don't worry about apparent contradictions in the Bible. They know that while they can't themselves articulate how to reconcile two Bible passages, they know that by virtue of divine authorship, they cannot contradict, so it's simply a matter of applying facts and logic to those two passages to finally understand them in context.

That same attitude should apply to the Magisterium. If two passages of the Magisterium seem to contradict, then the knee-jerk reaction should not be to reject the most recent one. The reaction should be one of trust.  The lack of dogmatic definition doesn't make the most recent pronouncement less valid.  One should be more ready to assume that one has not understood the passage, rather than assume that there is a contradiction between the two statements, just like we do when we confront two difficult passages in the Bible.

Now trusting is all very well and good. But there's the thorny problem that at one time there was a largely accepted idea among faithful Catholics that people do not have the right to religious liberty, that they have no right to worship as they please according to their conscience ("error has no rights!"). How is a Catholic who grows up in such an atmosphere supposed to be able to differentiate what the Magisterium says and means, in light of the fact that certain ideas gain currency as being orthodox?

I think it's necessary to point out that orthodoxy is a means to an end, it's not the end. I sometimes feel like internet Catholicism treats orthodoxy as the be-all end-all of our faith. It's not the purpose.  We're not a gnostic faith. We are obliged to know the Creed and obvious biblical doctrines, knowing the finer points is not necessary for salvation (although you should learn the faith as best as you can). The purpose of our faith is charity. Orthodoxy is a means to charity, and if it's not used as such, then it's pointless. If your knowledge of doctrine makes you into a proud jerk, you're better off being an ignorant heathen.

Since charity is the purpose of our faith, and charity is by which we will be judged, then charity should be the top priority. How does this solve the dilemma? For one, it places orthodoxy in the right order of priority. By all means, be orthodox. But orthodoxy isn't what saves. In placing orthodoxy in its right order, you make ignorance less of an emergency than it is. Because if you don't know the truth about whether there is a contradiction, if you err in good faith, it's not a good thing, but it's not something that will make you lose your soul.

Placing charity and the top of one's priority also has a curious outcome for people concerned with orthodoxy. Mark Shea likes to say that sin makes you stupid. But that means the opposite is also true: charity makes you wise. In learning to place more importance on charity and humility, the Holy Spirit will come to have more influence on you, and you will instinctually learn to differentiate between truth and error. Charity will always lead one to trust God, and not rely on one's personal judgement. John Henry Newman once said "It is love makes faith, not faith love." If you want to be able to believe correctly, one must be able to love correctly.