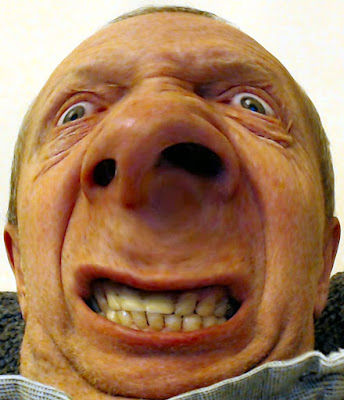 Miles Ecclesiae worked as an intern at Church Militant TV (producers of the Vortex). After coming to see what the organisation stood for, he left. This incident drove the last nail in the coffin:


At the time, I had admittedly stopped watching the Vortex due to my issues with it (despite it being company policy for all employees to watch it daily.) But I was intrigued when one of my best friends walked into the media room and asked us if we had watched that morning's episode. None of us had, and we all huddled around a computer and watched it together.

The video, released just before the Synod had ended, was titled Benedict's Fingerprints. Not knowing what to expect, I watched in shock and disbelief as the video unfolded. If you don't believe what I'm about to say, I recommend you watch the video for yourself.

In the video, Michael blatantly accuses Father Benedict (as he has asked to be called) of faking his illness to escape the papacy. "He resigned because of health reasons, but going on three years later, his health seems just fine. Contrast that with John Paul, who actually had a health issue," Michael says (emphasis mine.) That is the one time in my life where my jaw genuinely dropped in disbelief.

Immediately in my mind I began refuting this. Disregarding that far from his health being "just fine" Benedict can no longer walk without a walker and someone at his side, of course his health is doing better-- he no longer has the stress of daily life as Pope to wear his health down. Retiring from work to relieve stress and thus live longer is the purpose of retirement.

Michael blasted Father Benedict further, saying he elevated these figures messing up the Synod and then abandoned us to these wolves. "In an era where fatherhood is so disgraced, Pope Benedict is the one who will be remembered as abandoning his children in the hour of their greatest need." Perhaps most grievously, Michael says Benedict's abdication "may even rise to the level of immoral."

The conspiracy-minded accusations have got to stop. Now.

This is not helping the cause of orthodoxy.

This is not helping the cause of Christ.

Insinuating bad intentions where there is insufficient evidence for them is a sin.

Conspiracy-like accusations are not based on concern for Christ. They are based on pride. It makes their adherents into gnostics. They have the knowledge, they have the reason, they know better, the rest of us are lost sheep.

Nothing good will ever come of our efforts without humility. Where humility lacks, Satan abounds.

Just remember that anything can become an idol. We can even have false idols of God. Orthodoxy can become a kind of idol, where we make it the priority over everything else, including charity to others and fidelity to the Church.

Where, in the history of the Church, can you find Saints who acted in the way that they do?

The saints didn't attribute bad intentions to the pope. They didn't engage in intrigue. They didn't undermine the Magisterium. They remained faithful to the Church and her bishops. Do you know what St. Alphonsus Liguori said when the Jesuits were unjustly suppressed in 1773? "The Pope's will: God's will."

And while I do not believe that everything the Pope decides corresponds to God's wisdom, I certainly believe that at some level, there is providence at work, I also think that we owe the Holy Father and the bishops the courtesy of at least trying to interpret their words and actions in the most charitable way possible, until explicit evidence to the contrary.

I have done quite a bit of reading in order to collect quotes for my quotations blog. And one of the things the saints emphasize is obedience, fidelity and honour to a superior, even a bad superior.

Now the saints spoke often of obedience to a religious superior, not of the laity to the episcopacy. But the principle is essentially the same. We must be loyal. We must try to see bishops in the most favorable light possible, especially when they haven't said or done anything contrary to the faith.

The devil, seeing that there is no shorter road to the summit of perfection than that of obedience, artfully insinuates many repugnancies and difficulties under color of good, to prevent us from following it.

And it's the same with fidelity to the Church. People are afraid if they're faithful to Pope Francis, Vatican II, their own bishop, then they are betraying God.

What God wants isn't only our orthodoxy. He wants our obedience. So yeah, Pope Francis might do things that drive us crazy. You know what? He's still the pope and he has not said or done anything against orthodoxy (and no the MSM reports on what he says or does not are not reliable for this.) Vatican II might seem to contradict our private judgement on what we think the Magisterium is teaching, but the Lord wants our obedience. Our Lord set up a dummy-proof system. And part of our dummy-proof system is fidelity not just to doctrine but to people. That means trying to understand their perspective and their genuine motives, assuming good intentions before we reach the conclusion based on evidence that they have bad ones.

The quest for orthodoxy-to-the-exclusion of everything is poisoning our Church. I completely understand that dissent had rotted our church and the faith of our people.  But going in the extreme opposite direction of orthodoxy-or-else makes a bad situation worse.  Because now instead of trying to re-build the Church from within, and build it with the custodians chosen by Jesus Christ himself, it's like we're building it against them. That's not the way it's supposed to be! It creates a state of quasi-schism. There's the institutional, clergy-based church full of heretical rot, then there's the ultra-orthodox people outside the institutional Church screaming from the outside, gnashing their teeth at every sacrilegious hiccup. We think being cynical about the clergy and the Synod (to give but one example) makes us more wise to what's up in the Vatican, but the thing is, even if we are right, it doesn't make us holy, which is the whole purpose of the existence to the Church.

So please: criticize if you must, but criticize based on evidence and with charity, not out of bitterness and pride. Criticize in the spirit of fidelity. We must be loyal to the pope and loyal to the Magisterium, including Vatican II because that's the dummy-proof system our Lord set up. If we can't trust the Lord, we can't trust anyone.