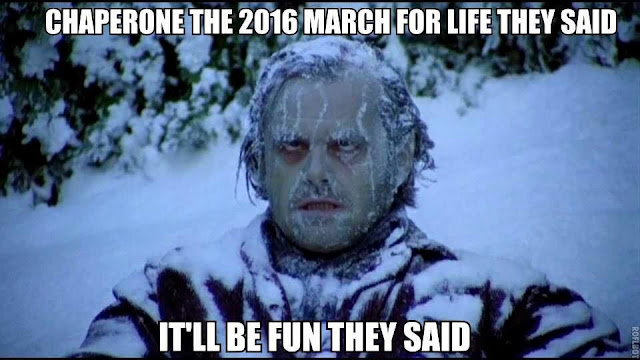 This is a small sample of stuff that showed up on my Facebook feed:

The big news of the day: Tens of Thousands of Pro-Lifers March for Life and Mourn 58 Million Abortions. Includes photos.


The Hill mentioned the low turnout. Yes, the crowds were a little thin this year. While I was watching the March for Life on the EWTN livestream, I thought to myself that they were marching rather fast, as if they couldn't wait to get it over with. Even with the low numbers, it was still a huge rally.

Breitbart has a funny yarn from Bikers for Life.

LifeSiteNews has a photo gallery. Don't forget to come back to this blogpost :D.

Carly Fiorina was the featured speaker. She wasn't supposed to make a stump speech but she did. I didn't know that before I read the article, but as I was watching, I was thinking: she showed up at the March for Life and the others didn't, so that should count for something even if she favors exceptions for rape and incest. It makes me wonder if other people were thinking the same thing, and that this might give her a little bounce in the polls. She sure could use it.

I want to get back to this video by Church Militant's Michael Voris, because I have a lot to say about it. He is not happy that the March for Life is becoming less Catholic, and seems to be compromising on contraception and other culture-of-life issues. So I'm just putting it out there for now.


And it wouldn't be a March for Life without counter-protesters:


I thought this was pretty cool. It's from Students for Life America. There was a pre-march, and it was filmed using a 360 Camera. You can use your mouse to look at the March from every angle. Hey Campaign Life, any chance we can get one for the March for Life in Ottawa this year? It would give the true picture of the size of the crowd:

One bus from Green Bay, Wisconsin got stuck on the highway on their way back. I guess all the groups who cancelled their buses were probably very wise.

Rand Paul introduces bill to give unborn children constitutional rights. Somebody is trying to prop up his flailing presidential bid. This will not go anywhere, of course.

Editted at 3 pm: Donald Trump Silent on Abortion on 43rd Roe Anniversary, Pro-Lifer Challenges Him to Speak Out