I keep meaning to update the blog. I keep meaning to write something. I just never get around to it. I have about 20 tabs open on my browser of things I want to comment. So instead of waiting to write 20 blogposts, which I will never do, here are some links for your consideration:

But that is not good enough for RSU, which claims that the discussion of male concerns makes women feel unsafe and “harasses” women.

RSU contends that MIAS could become “a breeding ground for misogyny and anti-feminism” and “spin out of control.”

Ignoring freedom of expression, RSU claims there is simply no need for a men’s issues group, because of men’s “systemic privilege” and because other groups like the Women and Trans Collective already address the interests of boys and men.


So if an opinion makes you feel "unsafe", you're allowed to silence others. An opinion. Nothing has spun out of control, but you're guilty even before you open your mouth. What a bunch of babies. 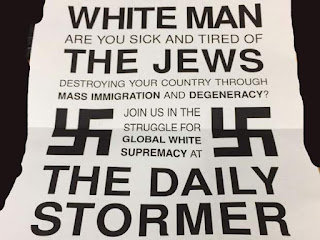 So my reaction to the poster had a surprising 2016 vibe to it: nostalgia. I liked the poster’s quaint transparency. Wow, a guy who hates Jews blows right past all the Israel “apartheid” and “colonization” nonsense and just cuts to the chase like in the old days. It’s refreshing in a way.

Mostly I appreciate that he’s not a Jewish intellectual pitching his hatred of other Jews as moral superiority. I appreciate that he doesn’t consider himself the reincarnation of the prophet Amos calling for justice to roll down like a mighty stream — for Palestinians, that is, not for his own people. That white supremacist holds terrible views, but at least he’s not disguising his anti-Semitism as righteous indignation on behalf of “the wretched of the Earth.”


It's very sad that Jews sell out their own people. And the thing is, they foment the genuine anti-semitism among the general population. Sadly, I have seen an increase in blatant anti-semitism, even among people who call themselves Christian and Catholic. There is simply no room in Christianity for the hatred of Jews and slander against them.

Eradicating Poverty Is Not a Gospel Value – A Reflection on a Teaching by Cardinal Sarah.

That reflection is kinda interesting in light of an invitation my daughter received from her school. It was to the Keep The Promise summit. (Bear in mind my daughter is an eleven-year-old fifth-grader. And this invitation was not for all the fifth graders, just those who were chosen.)  Keep the Promise is a campaign organized by the Canadian Teachers Federation -- a union group-- and its goal is to get political parties to "Keep the Promise" they made in 1989 to eradicate child poverty, which of course was never kept and which nobody had any intention of keeping.  The summit would provide the opportunity to discuss the causes and implications of child poverty, as well, as potential solutions (and here's the kicker) and to get kids to pressure the government to enact those measures. And this is all done under the guise of a neutral educational exercise. In a Catholic school.

Just an interesting contrast in my life.

Addictions doctor calls for treatment in Ottawa instead of supervised injections sites. Well duh. I'm very concerned about the implementation of Insite in Ottawa. I simply don't want my money going towards facilitating their habit. And while I am a libertarian-leaning individual, I would strongly prefer my tax money go towards rehab than  this. And PS: you're not doing addicts any favours by enabling them.

Canon Lawyer Ed Peters blogs on The Slow Decline of the Ordinary Magisterium. Here's the thing. The name of a document doesn't necessarily communicate whether what's inside it is part of the Ordinary Magisterium or not. Pope Francis could write some thoughts on a beer napkin and if he means to bind the faithful to it, then it's binding. The fact that Amoris Laetitia is a Post-Synodal Apostolic Exhortation doesn't mean it doesn't contain any Magisterial teaching. It just means that the larger purpose of the document isn't specifically to impart Magisterial teaching, it's pastoral.

Francis Found Weeping In Vatican Men’s Restroom After Learning Of Bad Amoris Laetitia Reviews.
He was all broken up after he read my comments on his document. Sorry Pope. Didn't mean to make you cry. :)

Ontario health minister 'deeply disturbed' by sex-selective abortion report. I think we should be thanking this health minister for looking into the issue. How often do elected officials take pro-life concerns seriously? When a politician moves the ball forward, you should reward him with recognition.

Minnesota moves to ban dismemberment abortions. I usually don't associate Minnesota with abortion restrictions. I would be very surprised if this was actually passed and implemented.

Ten Reasons for the Marriage Mess -- Why marriages tend to break down, from Fr. Longenecker.

Sedevacantism is Impossible: How We Can Know Francis is Pope. I urge you to bookmark this excellent article from 2014 and whip it out every time some RadTrad claims Pope Francis is not the real Pope. All validly elected popes are popes, period.  Fidelity to the Pope, even a bad pope, is a Catholic virtue.

I had a Dream about Amoris Laetitia (A Divorced Dad’s Thoughts). I'm not worried about the application of the Pope's pastoral principles to church-attending orthodox Catholics. I think the approach could work. I'm worried about the Christmas-and-Easter Catholics who are going to be told that they basically can receive Communion in spite of their second marriage (or that's what they will understand.) The Pope may have specified that this undertaking had to be done in a spirit of following the Magisterium, if the clergy defy the Magisterium, they won't make their faithful follow it, either.