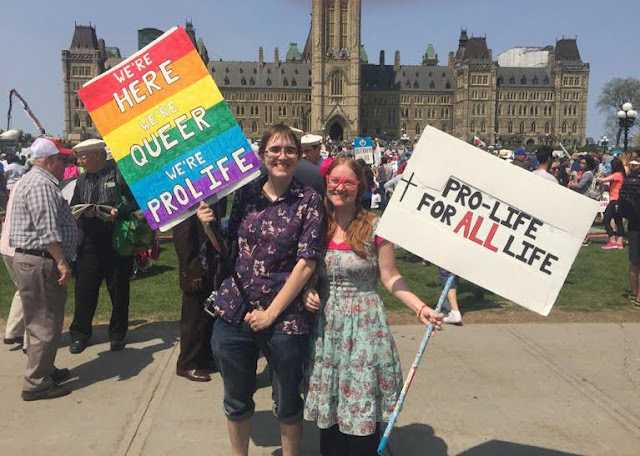 Alan (a trans) and Billie (a lesbian) showed up at the March for Life last Thursday. Alan writes:

To the marchers, it seems, even if we're heathens, queers and humanists are allies in a struggle that transcends any lesser differences. But to the counter-protesters, we're a clear and present danger. We're evidence that this isn't just the campaign of religious patriarchy they want to dismiss it as, but a movement that can and will involve all kinds of people, and is doing so more and more every year. I think that worries them, and I think that's a really, really good sign.


The pro-life movement is still overwhelming religious and Catholic. Let's not go crazy.

That being said, there will come a time when secular people and queers will become more numerous.

And I think religious people need to prepare for that.

I don't think you can stop religious people from being religious. I think the March for Life will always have an opening prayer and a bunch of religious dignitaries on the podium.

But there may come a time when secular pro-lifers will stage their own events. ( I hope they do!) They will not ask God for his blessing. They won't play religious music. And part of their message may even be sinful or blasphemous.

We have to be prepared for that. We're not going to agree on a lot of issues.

As a fetal rights activist I say: who cares? These issues have their importance. But we mustn't lose our focus: social recognition of the unborn as equal human beings and legal protection for them.

Social movements are made up of people who disagree on many things, but agree on the big picture. Our big picture is to end up abortion, and especially to get legislated enacted. Let's not get too bogged down by differences. It's true that the pro-life movement is one of the few remaining places where religious people can be openly religious. But for the sake of saving children, we may have to sacrifice that religious monopoly. We may have to take into account the wishes and beliefs of other people. This doesn't mean we stop being religious, but it may mean that we have to accommodate different attitudes and behaviours.

It's a matter of tolerating lesser evils to eradicate a great big one.