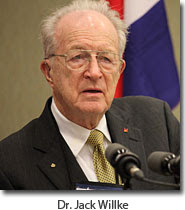 I had the pleasure of meeting Dr. Jack Willke two years ago at a pro-life conference.

One of the things that he said that surprised me the most was that when studied medicine way back in the 1950's, he did not know whether a fetus was a human life.

He had to investigate the question and come to his own conclusion on the matter, because it was not taught in medical school.

I think this ignorance of the unborn was what led to the legalization of abortion.

It could explain why Morgentaler had no qualms about performing abortions.