When is a Baby Not a Fetus? More Royal Baby Apologetics 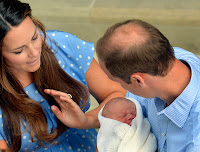 I know this post flies in the face of what I just posted about using the Royal Baby at every opportunity to make a pro-life statement.

But I was really surprised to this peace talking about the royal baby in The Atlantic of all places.

And so, only because it's in the mainstream media, I post this:


This week, as the U.K.’s Prince William and Kate Middleton were expecting their child at any moment, the impending birth received a galaxy’s worth of media coverage. That the child would be heir to the throne was a motivating factor in all this attention, to be sure. I was interested not only for this reason but for a less-noticed one: Countless media reports bore news about the “royal baby.”

Why was this noteworthy? Because this term, to get exegetical for a moment, was not used to describe the future state of the child—once born and outside of the womb, that is. No, the American media used this phrase “royal baby” to describe the pre-born infant. It’s not strange for leading pro-life thinkers like Eric Metaxas and Denny Burk to refer to a fetus as a “baby.” It's not strange, either, for people to refer to a child they're expecting as a "baby," regardless of where they stand on the issue of abortion. It is strange, though, for outlets like the New York Times and the Washington Post and Boston Globe--which purport to be neutral on the issue--to use this seemingly explosive phrase without so much as a qualification. And why is this strange? Because it codes a pro-life position into their description of the unborn child.