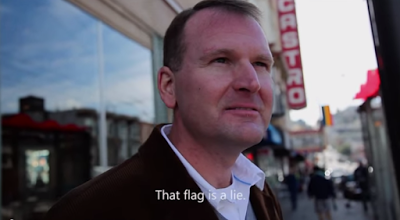 
We saw being “gay” as the answer – the promise of happiness embodied in the rainbow flag; once we know Christ – to claim to still be gay is hold onto that false ideology and all it stands for; because we must be made anew – and leave behind all those old ways of thinking and those old “labels.” ~ “And no man putteth new wine into old bottle: otherwise the new wine will break the bottles, and it will be spilled, and the bottles will be lost. But new wine must be put into new bottles; and both are preserved.”


I was having this very conversation with some younger Catholics. They all objected to this idea.


If you come out as a gay Catholic, you are less likely to diminish those homosexual feelings. Why? Because you receive kudos for coming out, your ego is stroked, and so that label becomes valuable.

If you want to leave behind homosexuality, stop labeling yourself. (And this is not a guarantee you will, it's only one step to get to that goal.)

By all means, acknowledge your same-sex attraction. Share your story, if it helps others.

If "gay" is a faster shorthand, then fine use that, but try not to.

But if you come out as a gay Catholic, base your identity on being a gay Catholic, and then get praised for your struggle, then of course you will unconsciously not want to let go of that identity, and by extension the tendencies. You will want to keep it, because people think you are so brave to come out.

It's basic psychology. The way you label yourself reinforces your identity. Ideally, you want to diminish and ultimately get rid of that identity.

If your struggle is public and people praise you for your work, the identity is even harder to be rid of because your pride is stoked.

You have to say yourself "okay, I was angry that time, but I don't want to be angry any more, that was then, this is now,  I will work on my inclination to be anger. I will learn the ways of patience."

The same principle applies to all sin.

On top of that, the "gay" identity was invented to spread acceptance of sodomy. People were said to be "born gay" in order to create a fixed identity, something they couldn't change. If they were born that way, the thinking went, their behaviour was acceptable. How could  you be born that way, wanting to "love" someone of the same gender, and be guilty of sin? It's "natural",

The "gay" identity is all part of that narrative. And adopting that narrative, that ideology reinforces it. It's like you're allying yourself with it.

Of course there will be resistance to dropping that identity. Because you've finally "come out", finally built this identity, finally gained acceptance, finally feel somewhat normal and not rejected. Your mind is in a good place, and you don't want to return to (what you think of ) as "the closet" where you deal with your issues on your own, in private, unattached to a community, unacknowledged, turned in on the self.

Your pride is in a good place. People like you, and that's really, really, important.

This is why it's so important to be connected to people who have the same struggles.

The purpose of Catholic spirituality isn't just to leave behind sin. That's a first step. It's not the end game. Your identity isn't your sin, or your inclination to sin. It's as a child of God.