Auschwitz vs. an Abortion Clinic: Similarities and Differences 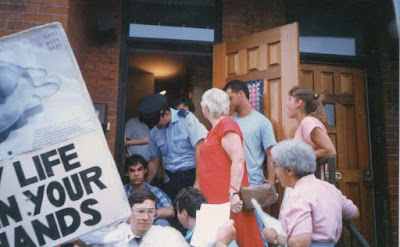 LSN on the recent news of the closure of the Scott Abortion Clinic:

Jim Hughes, president of Campaign Life Coalition, welcomed the news. “It would be the same response I would have if you told me that the camps were closing in Auschwitz,” he told LifeSiteNews. “I wish it had happened years before.”

This comparison can be construed as having a Godwinian function: reduce your opponents to Nazis, and you emotionally won the argument.

Somebody should probably invent a law that says that not comparisons to Nazis are invalid, and if you use Godwin to say that they are, you lose the debate.

The main similarities between Auschwitz and an abortion clinic is that they are 1) places of mass killings  and 2) the killings are due to widespread de-humanization of victims.

And the similarities end there.

Auschwitz was designed as part of a plan to eliminate certain categories of human beings who were perceived to be threats to the German people. In contrast, women who seek abortions don't necessarily view their fetuses as enemies, if they view them as anything at all. Some even think that they love their babies, and ending their lives is the most loving thing they could do.

Abortion clinics aren't out to eliminate all fetuses as if they were a collective threat, the way the Nazis wanted to eliminate Jews.

It's because of these emotionally-charged disimilarities, that I have not found the comparison between Auschwitz and an abortion clinic to be very useful. Even if the similarities are obvious to anyone who dispassionately examines the issue, abortion opponents naturally jump on the dissimilarities to discredit their opponents. So, you think women who want abortions are like Nazis? That's ridiculous! Getting rid of a pregnancy is nothing like the Holocaust! We're not out to kill fetuses. How dare you make the comparison!

You can try to cut through the emotional objections and try to get them to admit that BOTH kill human beings and that the human beings killed are de-humanized.  But they won't let you. They won't get to that argument because it's obviously true. So they try to make your analogy extend to comparisons you never intended to make so that you look like the bad guy for demonizing post-abortive women and their providers.

That doesn't mean  the compaison is invalid. And it doesn't mean it shouldn't be made. De-humanization has been a very real problem throughout human history. We need to impart to the next generation the importance of the radical equality of all human beings, whatever their condition, that they need to be protected from arbitrary killing, especially if they belong to a vulnerable group. We also need to impart the lesson that we must speak up for the vulnerable. And we need to do this regardless of how this comparison plays out in the abortion debate, because these are eternal values. Today it's the unborn who are threatened, tomorrow it's the sick and disabled, who knows who will be vulnerable a generation down the line. We have to make sure that someone will come to their defense.