BOOK REVIEW: Defenders of the Unborn: The Pro-Life Movement Before Roe v. Wade 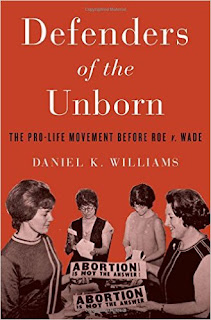 In Defenders of the Unborn, historian Daniel  K. Williams asks: why did the pro-life movement last so long, even as other social conservative movements faded away?

The answer lies in the fact that pro-lifers see themselves as leading a human rights campaign. This may be blindingly obvious to those inside the movement. But many on the outside still see the fight against abortion as a crusade against sexual immorality. Williams go through the history of the pro-life cause decade by decade to show that it had its origins in liberal values of defending the weak and not conservative sexual morality.


He begins the story of the contemporary pro-life movement in the 1930s. At that time, most abortions were illegal except to save the life of the mother. The first stirrings against pro-life laws were made by doctors concerned for women’s health. They invoked medical necessity to justify more exceptions to the law. Because it was argued in the context of medical necessity, abortion was treated as a public health issue. There was never any intention of making it available on demand: the humanity of the fetus was taken for granted. The opposition to abortion reform was led almost entirely by Catholics, eighty per cent of whom were New Deal Democrats, in contrast with today’s mostly Republican pro-life movement. The debate was largely academic and conducted by doctors, theologians and other thinkers. Mainstream Americans—read Protestants— if they had an opinion—tended to favor some liberalization.

In 1959, the American Law Institute passed a resolution calling for the liberalization of abortion laws in cases of rape and medical necessity. It signalled that the abortion debate would no longer be a merely academic discussion; it would now be played out in state legislatures. The resolution would serve as a model for abortion reform bills that were introduced throughout the nineteen sixties.

Doctors and lawyers—again all Catholic— testified in state legislative hearings and became the public face of the anti-abortion movement.  Behind the scenes, bishops would lobby lawmakers, backed up by Catholic voter power. The threat of losing the Catholic vote was serious enough that it sabotaged attempts at liberalization in California and Minnesota-- areas with significant Catholic presence.

Then in 1965, two events took place that seriously weakened the pro-life movement. The first was the close of the Second Vatican Council. Although the Church had never had any intention of enshrining the right to dissent, the media gave Catholics the impression that they were no longer bound by Church teaching. In turn, Catholics no longer felt compelled to vote according to Church doctrine. This seriously undermined the bishops’ lobbying power. The second event was the Supreme Court’s ruling in Griswold vs. Connecticut, which effectively gave couples the right to use contraception, making contraception seem mainstream and innocuous.

The decline of the Church’s moral authority and lobbying power, combined with the acceptance of contraception emboldened proponents of liberalization. They could credibly argue that Catholics were a minority trying to impose their values on the general population. That same year, reformers came within a hair of legalizing abortion in California. The bishops knew that their strategy was not sustainable. The leaders of the anti-abortion movement had to be found beyond the triad of bishops, lawyers and doctors.

The Right to Life League of California was founded on December 8th ,1965 in order to separate pro-life lobbying from the institutional Church. It was also created to recruit non-Catholics to the movement. Given these objectives, it’s not a little ironic that its founder was Cardinal James McIntyre of Los Angeles and that its board was composed of the usual suspects of Catholic lawyers and doctors. Nevertheless, Cardinal McIntyre swung quickly into action to implement his new vision by writing to the bishops of California asking that they instruct priests to recruit Protestants and Jews to the cause, especially clergy. He also hired a public relations firm to help shore up their public image. In time, the pro-life movement would diversify with more and more Protestants heading up local organizations.

The Right to Life League lost the fight to stop abortion liberalization in California, but it gained momentum and clout. And thus it became the model for the National Right to Life Committee, co-founded by Fr. James McHugh in 1968. Again, this organization, founded by a priest, was supposed to be independent of the bishops. It was intended to be an umbrella organization co-ordinating efforts to oppose abortion, as activist efforts were often haphazard and piecemeal across the country.  McHugh wrote to the bishops and asked them to organize their own Right to Life Committee where none existed. The Catholic hierarchy lent institutional support, but eventually local pro-life organizations successfully recruited Protestant leaders in the early 1970s.

Williams emphasizes that that the fight to oppose abortion was driven by two important liberal values: human rights and diversity.  Diversity was expressed in the pro-life movement in a number of ways in the early 1970s. When feminists had made abortion a "women's" issue in 1968, pro-life women such as Elizabeth Goodwin, Randy Engel, Mary Winter and Ellen McCormack entered the stage to combat the notion that being a woman meant being pro-choice. Evangelicals were jolted into action with the passage of abortion on demand in New York in 1970. Carl F. Henry, the editor of Christianity Today, a leading Evangelical magazine, wrote against abortion and surprisingly even encouraged Evangelicals to join the new pro-life groups despite their Catholic origins. Progressives who opposed the Vietnam War and capital punishment, such as Richard John Neuhaus also joined the movement. Left-wingers were often the backbone of crisis pregnancy centres, the most famous chain being Birthright, founded by Canadian Louise Summerhill.

The pro-life alliance with the Republican Party and the conservative movement can be dated from 1975.  The Democrats had affirmed Roe v. Wade and slowly abandoned pro-life constituencies. The Republican Party was generally lukewarm on abortion at this time. But GOP presidential candidate Ronald Reagan expressed support for the Human Life Amendment, which would offer constitutional protection to the unborn.  As Democrats like Ted Kennedy, Jesse Jackson and Al Gore betrayed the cause of the unborn, and others like Eunice Kennedy and Sargent Shriver focused on social programs to prevent abortions, Ronald Reagan and other like-minded Republicans seemed to be the only ones ready to act on fetal rights.

The mass entry of Evangelicals and the Moral Majority also changed the face of the pro-life movement in the 1980s. Whereas Catholics tended to combat abortion in isolation from other sins, the Moral Majority linked abortion to a host of evils such as pre-marital sex, homosexuality, divorce, and  pornography. In time, opposition to abortion became linked to a conservative Christian moral viewpoint, and liberal opposition to abortion was greatly marginalized.

Williams seems to attribute to the pro-life movement its greatest victories while it was at the height of its liberalism and bi-partisan support. Pro-lifers were able to re-criminalize abortion in New York in 1972 – a feat which had been completely unthinkable. They had also been able to stave off ballot measures in Michigan, and as well in North Dakota—a state where less than 20 per cent of its population was Catholic. Meanwhile, Williams depicts present-day pro-lifers as on the defensive. In a blogpost for The Anxious Bench., he wrote that  the fact that Republicans are unwilling to spend tax dollars on publicly funded healthcare makes them look hypocritical when they claim to care about women’s health. But that loaded question of women’s health is raised with the assumption that government-run programs are a necessary good. He also doesn’t seem to notice that when Republicans oppose social programs, they are being consistent. It is Democrats—who profess concern for the downtrodden—who should be made to explain why they consistently oppose protection for the unborn, no matter how common sense it is.

And the fact remains, that while it is true that Catholics did advocate for a comprehensive left-wing agenda in the sixties and early seventies, their advocacy didn't make fetal rights more popular. But siding with Republicans at least got the Hyde Amendment and the Partial Birth Abortion ban.   Rather than appeal to values that Democrats value less than abortion – such as social programs-- pro-lifers would do better to change their views on social programs.

Notwithstanding my disagreement with some of the author’s assumptions, I think the book is a must-read for all pro-lifers. To me, its value is not in its arguments, but in its narrative, introducing today’s pro-lifers to people and events that remain largely unfamiliar. Knowledge of the past would offer insights into what has worked and what has failed. We need these lessons so as to keep doing what works and avoid the mistakes of the past.

Defenders of the Unborn is available on Amazon.ca for 9.99 in the Kindle version. An excellent value. Go buy it!