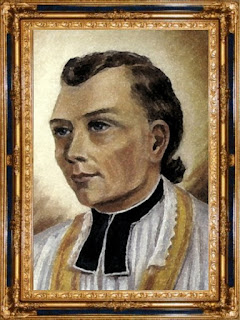 Blessed Jean-Martin Moye (1730-1793) is remembered by the Church as the founder of the Sisters of the Congregation of Divine Providence. As a missionary in China, he organized the first group of Chinese religious sisters.

But this figure also had a stint as an advocate of the unborn. In 1764, while he was a priest in Metz, France, he published a pamphlet entitled On the Extreme Care That We Must Have For the Baptism of Children in the Case of Miscarriage or in the Death of a Pregnant Woman. (I translated it-- please read it!)  He was mostly likely inspired by Francisca Cangiamila’s book Sacred Embryology, which addresses this very topic.

As the title suggests, Moye was trying to encourage people to baptize the babies of dead, pregnant women, as well as miscarried babies.

Regarding when the body is animated with the soul, he cites a number of possibilities: 40 days, 30 days, and even conception (which is a belief that can be traced back to the 17th century.) But he says that the most competent physicians state that animation begins at 20 days.

He does not explain why they think animation happens at 20 days. But I have a theory.

Before the age of cell theory, life was defined, biologically, according to whether an entity had functioning organs. It only makes sense: organisms have organs. The heart is the first organ to develop. In humans, it starts working at about three weeks or 21 days. The presence of a functioning heart would indicate the presence of a human soul. This is perhaps why physicians believe animation occurred at 20 days.

Even though this pamphlet corresponds to Catholic teaching, Father Moye was demoted by his bishop for publishing it. His enemies complained to his bishop about unfair comments about midwives and clergy in the pamphlet. For this, and other “transgressions”, he was appointed vicar of Dieuze, a fairly isolated village, away from the action in Metz.   He was, in effect, penalized for his zeal.

What I find interesting about this person is that he is an example of a saint who took seriously the idea that the unborn are human beings before their birth. Institutionally, this was of course the Church’s official stance. But judging from the need to write about this topic, it does not seem that, on the ground, priests routinely baptized the miscarried, or encouraged the faithful to do so. If they had done that, there would be no need to write a pamphlet encouraging the practice.